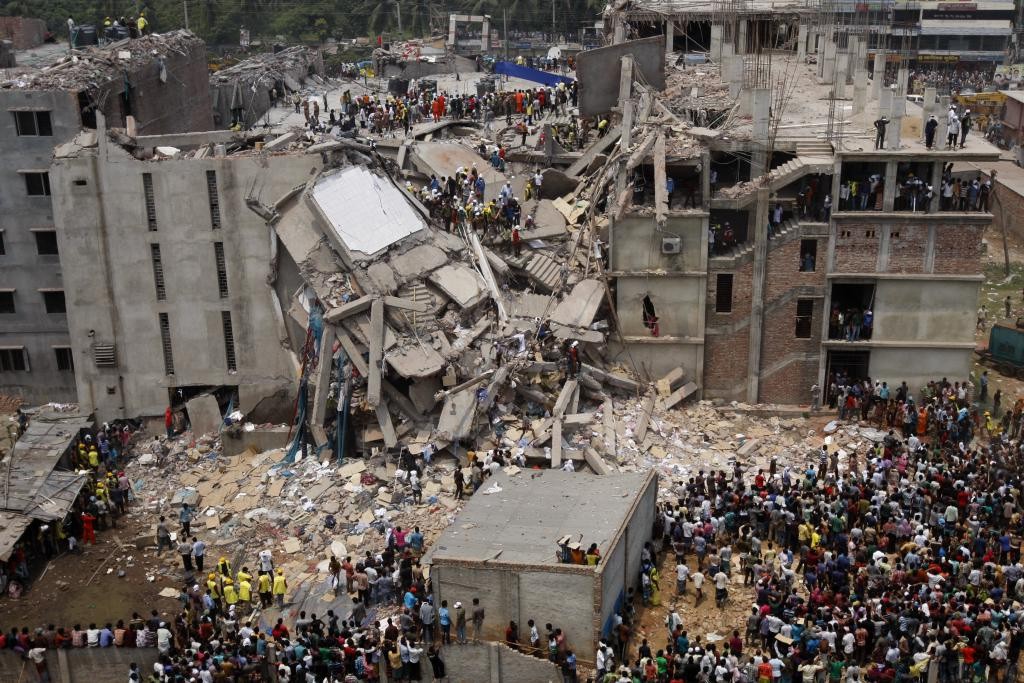 Photo by rijans / CC BY

The collapse of the factory building in Dhaka, Bangladesh, on 24 April 2013, which killed hundreds of  garment workers, will enforce  the notion that multinational corporations have the responsibility to ensure that the human rights of the people employed in their supply chain are respected.  In the future, no industry or enterprise will be exempt from the requirement to conduct a risk-based human rights due diligence on all its business activities and relationships.  This article expands on the meaning of the United Nations Framework of ‘Protect, Respect and Remedy’ now governing the relationship between international business and human rights, and provides an overview of the Guiding Principles adopted in 2011 for the implementation of the Framework (1).

The analysis will be presented in three parts: this part introduces the major features of what is now recognized as the authoritative human rights standard for business conduct worldwide;  the second part will look at some legal issues and discuss how corporate compliance with human rights due diligence requirements will affect the understanding and assessment of political risk;  the third part will address practical matters of risk-based human rights due diligence, in particular with respect to collecting evidence and conducting professional investigations.

UN Special Representative John Ruggie is the mastermind behind the Framework and the Guiding Principles, which were not only endorsed by the UN Human Rights Council, but also received the broadest possible support from business and civil society organisations.  In his recently published book “Just Business”, Ruggie tells the story of how he managed to get almost everyone on board (2).

The challenge Ruggie faced in 2005 after his appointment consisted in no less than unblocking the deadlock between the advocates of human rights on the one hand and business lobbyists on the other. At the core of the impasse lay the question of whether the future relationship between business and human rights should be regulated by a new mandatory system or rather by an improved voluntary scheme.  While voluntary initiatives such as the UN Global Compact — driven by the concept of Corporate Social Responsibility (CSR), but legally non-binding — were not perceived as effective enough by many human rights activists, all attempts to adopt legally binding international norms within the UN failed to receive the necessary support from governments and business interests.

In response to this situation, Ruggie, a scholarly expert on multilateral decision-making, tried to break the impasse by looking for common ground and joint solutions to practical problems.  In combining mandatory and voluntary approaches, core elements of the Framework and Guiding Principles aim to assist corporations in operationalising a human rights policy within their enterprise risk management system.  Ruggie applied the concept of “due diligence” to “human rights risk” and thus introduced the concept of compliance to CSR (3).

Due Diligence in human rights risk

Due Diligence is already a standard  procedure, required in many business undertakings.  Enterprises carry out Third-party Due Diligence in order to identify corruption, fraud or money-laundering risks in relation to their business partners and to comply with international regulations and national laws.  The Due Diligence approach is also required with respect to the US Conflict Minerals Rule, which is a special case within the business and human rights context (4).

Even if the major motive for conducting  Due Diligence in the past might have been coping with ‘human risks’ directly affecting the success of a company’s national or foreign business operations, the concept of Due Diligence has altered in recent years.  It is now widely accepted that corrupt practices associated with business activities also harm the political, social and economic environment in which the company operates;  this clearly reinforces the case for exercising Due Diligence, if one accepts that a healthy, stable and prosperous environment matters for the company’s long-term success.

Finally, looking at the scope of the Due Diligence requirements, the permanent human rights task force needs to be cross-functional,  because not only a company’s own activities have to be covered, but also its “relationships with business partners, suppliers, and other non-State and State entities that are associated with the enterprise’s activities.” (Principle 17)  In the future, multinational corporations will no longer be able to say that they did not know what was going on at their subsidiaries or at the end of the supply chain.

How business can earn a reputation for responsibility

The detailed and demanding prescriptions for the operationalisation of human rights due diligence together with the communication and remediation requirements regarding actual direct and indirect involvement in human rights violations, constitute an integrated system to enact the “corporate responsibility to respect human rights”.

Within the Framework the corporate responsibility to respect human rights is the central pillar, between two other pillars; the first establishes the obligation that “States must protect against human rights abuse within their territory and/or jurisdiction by third parties including business enterprises.”   The third pillar sets out the rule that “States must take appropriate steps to ensure, (…) that when such abuses occur within their territory and/or jurisdiction those affected have acces to effective remedy.”

The combination of these three pillars appears to be a rather ingenious construction.  It acknowledges the state’s primary competence for enforcing compliance with human rights by making the necessary national laws, which also extend to business enterprises operating in their country.  Ideally, this clarifies the issue of legally binding regulation.  If, however,  the state is unable to fulfill its duty, or if the state itself is involved in human rights violations, the corporate responsibility to respect human rights shall still be in effect as an independent compliance system.  In particular, any complicity, known or unknown, in state violations of human rights, is something a corporation will seriously seek to avoid.  Publicly proving that it has established a transparent and working Due Diligence process will become the key to earning a reputation for responsibility with respect to the protection of human rights.

The question of whether the international development of such rigorous procedural standards for Human Rights Due Diligence might take the option of international legal regulation off the table is one of the key issues surrounding the implementation of the ‘Protect, Respect, and Remedy’ Framework and Guiding Principles.

Also relevant in that regard is the US Supreme Court’s decision of  17 April 2013 to reject the human rights law suit Kiobel vs. Shell. In sum, it ruled that the Alien Tort Statute (from 1789) on which such lawsuits against corporations concerning involvment in human rights violations in foreign countries (here Shell operations in Nigeria) were based, cannot be invoked because the Statute does not imply extraterritorial jurisdiction.  Given that this legal instrument is no longer available for human rights advocates, the call for an international legal mechanism governing corporations’ behaviour might become more urgent.

The coming parts of the article will look into these and other legal issues, related with bilateral investment agreements for example,  and discuss multilateral standards and Due Diligence practices which support companies in being responsible and showing their respect for human rights, and thus in avoiding exposure to legal action in the first place.

(1)  Protect, Respect and Remedy: A Framework for Business and Human Rights, Geneva: UN Doc A/HRC/8/5, 7 April 2008. Guiding Principles on Business and Human Rights: Implementing the United Nations “Protect, Respect and Remedy” Framework. Report of the Special Representative of the Secretary- General on the issue of human rights and transnational corporations and other business enterprises, John Ruggie, UN A/HRC/17/31, 21 March 2011. All documents related to the process are available on the UN Human Rights website.

(4)  View the archive of Global Risk Affairs for previous articles on Due Diligence.  The SEC Conflict Minerals Rule as well as the anti-corruption-related US Foreign Corrupt Practices Act and the UK Bribery Act are special national laws in that they claim extraterritorial jurisdiction.