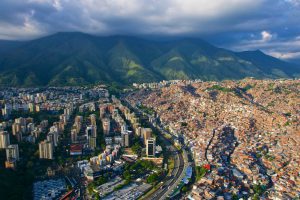 On 6 December 2015, after Venezuela’s opposition coalition Mesa de la Unidad Democratica (MUD) [1] had won the parliamentary elections with 67 per cent of the votes, many observers expected that Chavismo, the authoritarian-socialist ideology of late President Hugo Chavez, continued by his successor, Nicolás Maduro, would come to an end and that democracy would be restored in Venezuela.

That did not happen, as Maduro managed to deprive the Parliament of its power with the support of the Supreme Court of Justice. He violently cracked down on civil protest, thus dividing the opposition, and with the help of the National Electoral Council succeeded in excluding the most important opposition parties from the electoral process. The military and police increased repressive measures with the support of the paramilitary forces Colectivos. Together they are said to be responsible for the death of more than 120 protesters [2].

Maduro’s new authoritarian regime also relied on the political, economic and financial support from his allies, Russia, China, Turkey and Cuba – who, besides being unified in their opposition to the US, take a vital interest in the Venezuela’s rich oil, gas and gold resources.

However, a particular trigger event propelled the President of the Parliament, Juan Guaidó, to the front of renewed political protest demanding Maduro’s resignation from power. Maduro had been elected President in 2013 and his term ended in January 2019. In the presidential elections held in May 2018, the main opposition parties including MUD were banned and thus refused to acknowledge Maduro’s victory. When the Supreme Court confirmed the start of Maduro’s new term in January 2019, opposition parties reunified in protest and claimed that the presidency was vacant. The executive power was temporarily assigned to the President of the Parliament, aimed at organising new elections and restoring the previous constitutional order.

Guaidó is seen as a charismatic leader who is able to unify opposition parties and mobilize demonstrations of popular discontent. However, actual regime change and free democratic elections are unlikely to happen unless additional conditions are met. Most importantly, the current political elite surrounding Maduro, in particular the military establishment would have to split internally. The second requirement would be increased international pressure in support of democratic change.

On 5 February 2019, the Parliament approved the “Statute Governing the Transition to Democracy to Restore the Validity of the Constitution of the Bolivarian Republic of Venezuela”[4]. Notably, Article 18 asserts the need “to create the legal incentives and guarantees for civil and military officials to act in accordance with the Constitution”. It also offers “guarantees for the democratic reintegration of people who contribute to the restoration of the constitutional order”.

At the international level, the United States and the European Union have increased pressure on the regime [5], also supporting the idea of offering amnesty to those members of the military who abandon Maduro [6]. Most Latin American countries who are part of the Lima Group, have rejected the Maduro regime. The opposition has won broad international support, with 56 countries [7] recognising Juan Guaidó as Venezuela’s legitimate president.

Although the economic and social crisis has continued to deteriorate, the military may not be willing to abandon Maduro. They have supported both Chavez and Maduro in the past, taking advantage of every crisis to expand their political power, secure economic benefits, privileges and access to resources.

One key question therefore is, how far the military might go in repressing popular protest and persecuting the opposition given the new international conditions. Another question is whether the regime’s current international allies are willing to sustain their support of the regime if it comes to a more violent escalation in Venezuela.

With respect to possible scenarios for regime change in Venezuela the following four variables are at play:

The main political actors in these scenarios are: Regime-Military Alliance; Opposition Alliance; Citizens; and, International Community.

The political repression vis-a-vis the opposition is normalised and the crisis is deescalated. The regime manages to contain the decline in oil production with the support of international oil companies. China and Russia continue to provide economic support to the government, while obtaining new concessions to exploit commodities.

Additionally, the government reduces its control over the economy and Maduro might be replaced by a civilian or a military successor with the purpose of creating confidence within international markets.

The opposition is divided again. The military guarantees the political balance as long as sufficient revenue is generated to be distributed amongst themselves.

The government cannot contain the fall in oil production nor secure sufficient Chinese and Russian economic support. The military put pressure on Maduro’s government to initiate a process of dialogue with the opposition.

The opposition manages to maintain internal unity and enjoys support from the democratic international community to pursue a negotiated regime change with the government. Political concessions would include guarantees for resolving the crisis through free and competitive elections, recognition of the Parliament, the end of political persecution in exchange for dismantling international sanctions and offering amnesty, and continued privileges for those members of the regime elite that participate in the negotiated transition.

In this scenario, finding an acceptable formula to rebuild public institutions, in which decisions are at first taken consensually by the opposition and the regime, without affecting the regime elite’s security and business interest, is key.

The government cannot contain the fall in oil production, nor manage to secure the required Chinese or Russian economic and financial support. The collapse of public services accelerates. Social protests increase and can no longer be contained by the security agencies, further deepening the crisis. The protest finally spreads throughout the country and across all social and political sectors.

International sanctions increase the pressure on the government and military. Internal disagreement results in a rift within the military, allowing the moderate parts of government and opposition to build a transitional unity government that guarantees the security of the military and those close to the regime. An election is called with trusted candidates from both parties. The most radical parts of the regime and military elite are detained to calm popular discontent. The economy opens up to national and international private companies. The country also begins a gradual process of political liberalisation, which is however supervised by the moderate military.

Different from the previous scenarios, the driving factor here would not come from internal but from an external forces and the relevant subscenarios come in three versions:

The range of possible scenarios for regime change presented above, underlines the high level of uncertainty surrounding Venezuelan politics. At the time of writing, uncertain expectations work against building a critical mass required to reach the tipping point towards regime change. Moreover, the growing importance of the role of the international community as well as its division into two groups aligned with Venezuela’s government and opposition, respectively, further increased the complexity of the domestic conflict, also making the country’s political future a stage for geopolitical rivalry.